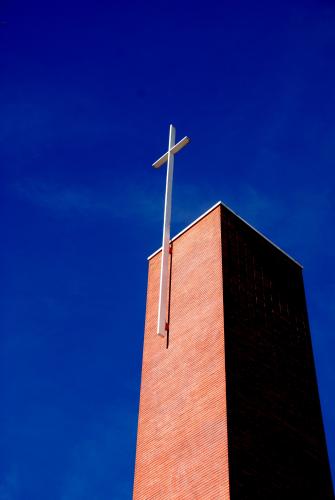 December 11, 2012
In the early 1950s, the Most Reverend Robert J.Armstrong, Bishop of the Diocese of Sacramento, realized that the once rural parishes of St.Philomene and Our Lady of the Assumption were overflowing with Catholic families.  He reconfigured the area and created a new parish – St.Ignatius.  The growth of Sacramento had stretched the ranks of the diocesan priests.  Bishop Armstrong invited the Jesuit provincial to send priests to staff the new parish, build a school, and eventually build a Jesuit high school.  In 1954, the provincial sent Father Fred Cosgrove, S.J., Prefectof Discipline at St. Ignatius High School in San Francisco, to be the first pastor.  Father Joseph Keane, S.J., a former Navy chaplain, came as the assistant pastor.  They set up housekeeping and business in a home on Berkshire Way – the first St. Ignatius Parish Rectory.  A warehouse on the corner of Watt Avenue and Arden Way became the parish church – on Sundays.  On March 9, 1954, the first Mass of St. Ignatius Parish was celebrated with an altar borrowed from St. Mary’s Cemetery and 200 metal folding chairs borrowed from St. Philomene Parish.  This church was affectionately referred to as “the barn”.

The families of this new parish saw as their most urgent need a Catholic grammar school.  Only blocks away from “the barn” was a vacant lot – 20 acres – called Bishop Armstrong Park.  The bishop had envisioned a hospital on this site, but the order of Catholic brothers who were to staff the hospital considered the location “too far out of town” to be effective.  The parishioners convinced the diocesan leaders that this was the perfect place for the new school.  Without delay, $130,000 was pledged and the  school was constructed.  Only a shortage of bricks delayed the opening from September to October of 1954.

The Sisters of the Holy Names staffed the school.  The first wing housed the first, second, and third grades.  The second wing was completed in 1955 – followed by the third wing in 1956.  The front wing was constructed with portable interior walls, and it became the parish church each Sunday morning, replacing “the barn”.  The first graduating class of thirty-six eighth graders received diplomas in June of 1958.

The parish experienced phenomenal growth during these first years.  In 1959, the church building was completed, and permanent walls replaced the portable classroom walls in the front wing of the school.  St. Ignatius Parish School registered nearly 800 students in the fall of 1960.  To accommodate the burgeoning population, two classrooms were set up for each grade, and each individual room was furnished for fifty students.

Over the next dozen years, the enrollment declined as the demographics of the developing area changed.  By the early 1970s, there was one classroom for each grade.  And as Catholic schools were experiencing declining enrollment, religious orders were finding fewer vocations.  Sister Dominica was teaching the first grade, Sister Juan Marie was in the fourth grade, and Sister Maleda Mary was the principal – and the rest of the staff members were from the laity.  In October of 1974, the Superior of the Sisters of the Holy Names informed the pastor, Father Carroll Laubacher, S.J., that the order was consolidating and reassigning its members.  The Sisters would be leaving St. Ignatius at the end of that school year.  That was an unfortunate but common occurrence at the time.  The Parents Club lobbied the Holy Names provincial to reconsider, but the decision had been made.  Faced with this dilemma, many Catholic schools closed.  But the parents of the St. Ignatius School community banded together – determined that the school would continue.

Under the guidance of Sister Maleda Mary, a committee was formed to oversee the establishment of a policy-making School Board and draw up a mission statement. The new School Board would be charged with keeping the school Catholic and keeping it affordable. A sub-committee of the newly formed School Board was charged with hiring an administrator to take the community through the transitional period.  This transition was a precedent-setting venture in the Sacramento Diocese – even in Northern California.  Catholic schools in the Archdiocese of Chicago had faced this critical juncture already – and succeeded, and the St. Ignatius School Board looked to representatives from Chicago for guidance.  And when St. Ignatius successfully negotiated the passage, the strategy was set for other diocesan schools faced with the same crisis.

In the fall of 1975, St. Ignatius School opened its doors with a new principal and a full staff of lay teachers. The School Board formulated policy.  To keep the tuition affordable, the Parent Club fund-raising was now a critical part of the school budget, no longer just for enrichment.  The Parent Club staged the first Family Faire in the fall of 1976, and it became an annual event for the next twenty years.

Since 1975 St. Ignatius School has prospered under the leadership of the School Board, now called an Advisory Council, lay administrators and teachers, and staff members – all dedicated to the cause and calling of Catholic education.  Since its inception, St. Ignatius Parish School has sent more than 1700 graduates on to higher education and then out to make their marks on the world as priests, teachers, lawyers, physicians, business owners, writers, fire fighters, police officers, counselors, artists, volunteers, and parents in our own school community.

In 2009 the school and the church leaders decided to move forward with a long-desired plan to open a preschool for the St. Ignatius Parish community.  In doing this, the Parish  extended the Catholic faith and Jesuit charism to its tiniest parishioners.  St. Ignatius Parish Preschool joins the school in educating children in Faith, Action, Integrity, Thought, and Health.

St. Ignatius School has come a long way from its beginning – as a dream in the hearts of the parish founders.  It has kept pace with educational philosophy – and technology – and society.  It has served its children well.  It has served its families well.  It lives on as a tribute to those who had the dream.  And it has remained true to its mission – to provide an exemplary, affordable, Catholic education to its children.
Back
This item appears in: