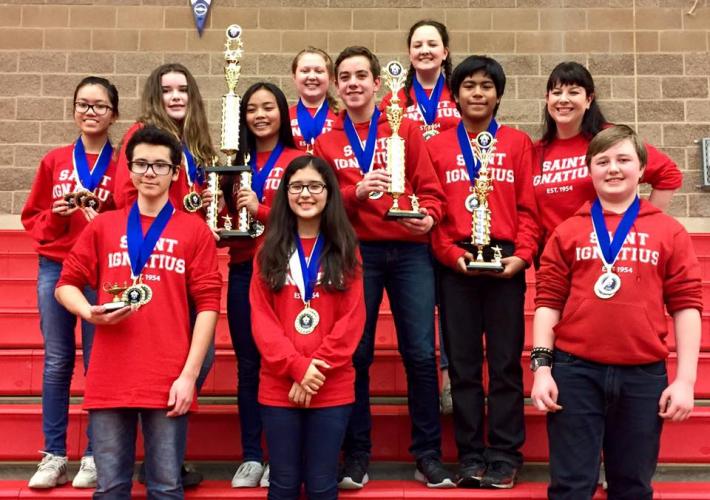 We are so pleased to announce that for a record-setting ninth consecutive year, St. Ignatius Parish School was the Diocese of Sacramento’s Junior High Academic Decathlon Champions. The team, comprised of seventh and eighth graders, went on to place third at the statewide decathlon championship, which was held this year at St. Edward the Confessor School in Dana Point. No other school in the 27-year history of the event has achieved this unprecedented success.

“We are so proud of our students, coaches and parents,” said Patty Kochis, principal of St. Ignatius School. “Literally thousands of hours go into preparing for this competition. We were honored to once again represent Sacramento at the statewide competition.”

The St. Ignatius Academic Decathlon team represents a broad spectrum of the school’s student body. One member of the team is the Student Council president, as well as running on the cross country and track teams, another is a singer in the Sacramento Children’s Chorus and throws shotput, two are Boy Scouts, two consistently assist as Altar Servers, one is a published author, and three are members of our Championship Volleyball team. In addition to their full school and extracurricular workload, team members spent most of their lunch hours and weekends studying.

The Academic Junior High Decathlon is a competition for students in grades 6-8. There are ten events. Two are collaborative team efforts – a logic quiz with 20 rigorous thinking problems, and a super quiz with 50 multiple choice questions on five broad academic themes. Twenty-two schools took part in the diocesan event, which culminated in a 50-question “Super Quiz,” where students test their knowledge in five subject areas: science, social studies, literature, fine art and religion. Just some of the subjects they studied for this year’s competition were Leonardo da Vinci, The Five People You Meet in Heaven, Marie Curie, Mother Teresa, Newton’s three laws of motion, Dr. Martin Luther King, Jr., the electromagnetic spectrum, the skeleton, animated film, the Declaration of Independence, and radicals and integer exponents.

“The sincere and tireless dedication of these students never ceases to impress me,” explained Erin McGraw, team coach. “The students’ ability to collaborate with, support, and help one another is a testament to the success of the team, and truly embodies the Ignatian theme of men and women for others.”

Congratulations SI decathletes! We are proud of you.

Back
This item appears in: